My 3 most important productivity rules 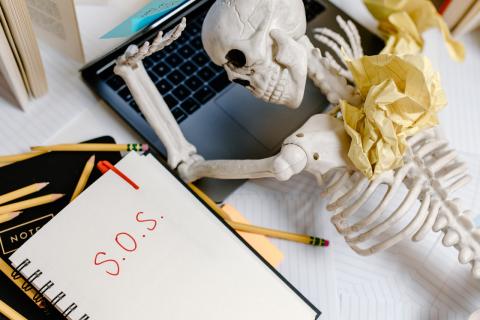 The time I take to work, I want to make as effective as possible. I therefore avoid surfing the web or writing messages on my smartphone at the same time. Instead, I try to jump right into the work process and generate a flow that carries me quite a bit through my tasks. But I have many different projects going on at the same time, and I've often found myself unable to choose one to keep working on, despite having so many projects. It was a bit like the forest you can't see for the trees. I started by creating a project list, hoping that by just scrolling through my list I would be able to decide on one more easily. Not a chance! This is the point where frustration sets in quickly:

When you want to use your time as effectively as possible, but you fail to choose the right path, the standstill feels twice as brutal.

For sure: there are always projects you feel a bit more like doing than others. On weekends, for example, I'd rather work on my drone or work outside on my vegetable garden instead of coding a web app, which is what I've been doing all week. Still, I had a hard time choosing a task or project to work on at all, and instead of just getting started, I often found myself thinking too long about what to do.

Ok, ok stop! This has to end: the time I spend brooding is irretrievably lost. Surely it would be much better to put it into some project instead of just letting it fly away, building up more and more frustration. Not letting this time pass by and getting ahead in my projects became my most important project from then on.

Here are my top 3 productivity rules:

I give every unloved task at least 5 minutes. So I deal with the task for at least 5 minutes and then have the choice to either keep working on it or put it aside again. Most of the time after 5 minutes I have worked myself in so much that it is easy for me to just continue.

Done is better than perfect

My inner perfectionism often gets in the way: I regularly catch myself thinking too long about something instead of just doing it. Whether it is a text I'm writing, where I then think about every single sentence or even every single word. Or my handicraft projects, where I am driven by the inner demand to find the best possible solution right away. It's better to start simple and then tweak things later in a next step instead of trying to get the best shot right away with the first attempt. In fact, I have found that I make much faster progress when I divide improvements into further steps.

Onboarding: be sure to write down your next steps!

For many of my projects, the 5 minute rule isn't always enough. Especially for projects that have been laying around for a while, there's just enough time to understand what I did last. I find myself painstakingly reconstructing the last problem only to end up with a "Oh yeah, that's what I was thinking". The 5 minutes are then often already gone.

This is why I have created a "Next-Step" list in all my projects. Whenever I finish a project for the day, I make a note on this list of at least one very specific task that I need to continue working on. And "concrete" here really means "very concrete"!

An example: I'm in the process of developing a landing gear for my drone project. So it is obvious to note the following on the list of next steps: "Develop landing gear".

Sounds good, but it's not, because it makes it harder for me to get back into the project at a later date. Sure: currently I know exactly what is meant by this and I certainly already have one or two ideas in my head how I could build the landing gear. But a few days later these ideas will be gone for sure.

So the following entry is better:

With this task I can start immediately without thinking the next time I go back to the project. So I can open my CAD program right away and place the hole.

By having concrete tasks, it's easy for me to get back into my projects, and once I've started a project and gotten something done in it, a flow sets in pretty quickly that carries me from task to task. If not, then that is also good: I have at least completed this one concrete task and I can immediately formulate a next one.

Join a growing community of friendly readers. Every Sunday I share my thoughts about rational thinking, productivity and life.